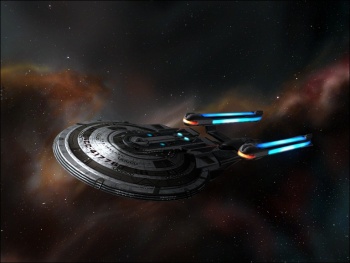 The Valor Class is a variant of the Starfleet Excelsior Class Cruiser. It first appeared in 2295 following the extreme success of the Excelsior in the field and 10 cruisers were ordered, however with the signing of the Khitomer Accords funding for military was reduced and the Marines had 4 of these ships. By 2355 when the Cardassian War began all 4 where in mothballs and it was decided bringing them back to active service would be too expensive so the Marine’s continued to rely on Starfleet for transportation. 2367 when the Borg attacked Earth and the Marines were repowered these 2 were brought out of mothballs as training cruisers while the Federation Council approved the construction of 28 new ones based on the new Excelsior models. When war broke out with the Klingon Empire there where 42 Valor Class Cruisers in service but the Marines noticed that with newer technology and larger numbers of troops being moved the Valor was not up to the task. The Federation approved the development of a new mass transport for the Marines which would not enter service till the middle of the Dominion War, the Shran Class Cruiser. Currently the Valor Has stopped being made but most are still in active service. They have not been approved for retrofit thus will be phased out at the end of their service life. Research is underway for a new mid-sized troop transport.