The USS Veracruz is named after the State of Veracruz located on the east coast of Mexico, which received its name from Hernán Cortés when he landed on the coast of Mexico en route to a fateful meeting with the Emperor Montazuma. Veracruz was also a key point of conflict in the Mexican-American war.

In the present day, Veracruz is known for it rich culture and resources, which include producing natural sugar, vanilla and even rum. Historical ruins, such as those found at El Tajin, are sprinkled throughout the State, maintaining a link with the past even as progress continues.

The Allegiance Class USS Veracruz is the second Federation starship to carry the name of Veracruz beyond the Sol system; the first USS Veracruz served during the Dominion War, most notably at the Siege of AR-558.

Construction of the Allegiance-class ship began in 2385 in Cascadia Shipyards. This was the first, and so far only, Allegiance class starship built in the Delta Quadrant under the UFS banner. The USS Veracruz launched on 111012, and has been under the command of now-Rear Admiral Kinney Randt since its launch.

The first mission of the Veracruz truly tested both ship and crew, as they were forced to forego the luxury of a shakedown cruise, and instead set out in pursuit of a stolen Federation Battle Cruiser prototype codenamed the USS Proto. Both ships were evenly matched, and it was only the experience of the Veracruz crew that made the difference.

Some of these crewmembers remain aboard even as the Veracruz hit its five year mark. As the ship turned five on 161012, in addition to Kinney Randt in command, the ship also has been home since its launch to: Kinney’s husband, and Veracruz chief builder, Moonprince Rhode, Veracruz XO Aryela Dagger, Chief Science Officer Skot Brit and helm officer LeighAnn Mantis. All of these people served aboard SS Tranquility before the launch of the Veracruz, and were still aboard at the 5 year anniversary.

Support and Auxiliary systems were quickly installed utilizing the replication construction technology. One of the most ingenious additions was the inclusion of an automated repair system that was based upon the automated repair systems Starfleet Engineering and Sciences had reverse engineered from a captured Dominion Battlecruiser. Holographic emitters were also placed on every deck so that emergency medical holographic programs or holographic personnel could be permitted access to any location aboard the ship. The final component installed was the Enterprise’s advanced communications array. Attached to the Long Range Sensor Antennae, the Allegiance's Communications Array would be capable of reaching distances beyond even the most advanced communications satellites and, as needed, would even able to process communications to relieve stresses placed on neighboring communications relay stations and distribute them to their receiving stations. Construction was completed in 2380.

Despite not being officially commissioned and not having completed a shakedown cruise, the Allegiance was deployed on several missions along the Klingon frontier in 2381. These missions were designed to put the Allegiance through its paces and it faced, on more than one occasion, extreme odds that would destroy lesser vessels - including an encounter with a remnant of the Borg Collective that had mysteriously been reactivated. Starfleet Command, despite earlier reservations, was impressed by how the Allegiance handled herself in combat against a superior Force.

The Veracruz was assigned to Task Force 1 and remains on of the core vessels protecting Pinastri Prime and conducting regular patrols around the system as well as its own missions.

Unit Run: 1 of this Variant 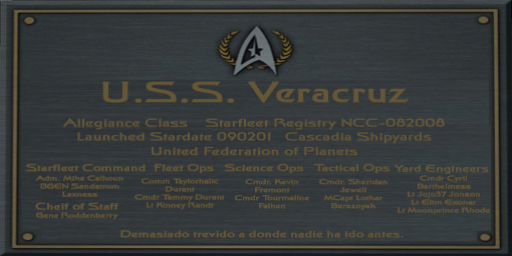