The USS Shogun, NCC73812, is a Sovereign Class Starship launched in 2384 under the command of Captain Ulrich Bechir. After over two years of exemplary service, the USS Shogun was initially declared "Missing, Presumed Lost" in the aftermath of hostile action with an Hirogen fleet. Later rediscovered that year by the crew of the USS Veracruz, she was put back into service under the command of Commander Mac Gaelyth after extensive repairs and refits following the conflict with the El' Dorain Combine .

On Stardate 140123 The USS Shogun was put back into service under the command of Commodore Kermie Mistwallow. Command was transferred to Captain JamesKillian Resident on 150615. 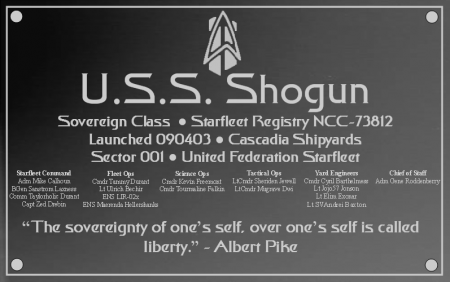 Missions of the USS Shogun