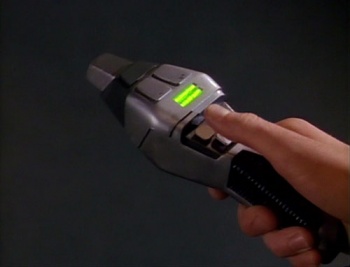 A type-2 phaser is a typical hand-held, directed-energy weapon used by Starfleet and United Federation of Planets personnel during the 23rd and 24th centuries.

More powerful and generally larger in size than the type-1 phaser, type-2 phasers were kept aboard Starfleet and Federation starships, starbases, space stations and at planetary facilities.

A descendant of the EM weapons and phase pistols of the 22nd century, the type-2 phaser was introduced before the mid-23rd century and was standard issue aboard Starfleet vessels by the 2260s.

Utilized primarily in defensive situations, the phaser type-2 had several applications, from use as a weapon to use as a cutting tool, explosive device, or energy source. Storing considerable energy, most phasers were distinguished by a roughly pistol or gun-type configuration, firing a focused energy discharge in the form of a beam or steady stream.

In the nearly two hundred years since their introduction to Starfleet personnel, several models and makes have been observed.

Type-2 phasers can cause severe to deadly injuries or phaser burns.