SS Peedy Thor, NCC 122355, is a Watchtower Class Station. We are in orbit above Pinastri Prime, and we officially opened our doors for operation on 180301. The station is named after one of our more prominent members, the late Admiral Peedy Thor. We strive to continue his vision and drive to make the station a crowning jewel of UFS. Admiral Peedy Thor, Gone but Never Forgotten.

After the recent activities that have occurred we have pinpointed the subspace beacon that the dormant virus was sent from. We are to take the USS Goddard to investigate.

It has been two days since we returned from our mission and we are still no where near discovering where the virus originated from.

We assumed that it was at Communications Subspace Relay 243 as that was where the trail ended. I have ordered a section of the Goddard's Computer core to be isolated so we may further investiage the information we downloaded from the relay.

I have ordered the Relay to be taken offline and isolated while the investigation is ongoing.

What is perculier is that upon approach to the relay we seemed to have some sensory issues, firstly the ship detected a Borg vessel, which is a query in and amongst itself, and then it changed it to a Klingon Vessel.

I have sent a communication to the Fleet Commanding Officers in the hope that this communication relay does not cause them any issues and to be mindful of the situation while my crew investigate further.

Hopefully the 16th Special Task Force will uncover some more clues for us to followup on during thier missions.

Their mission, their supposed quiet recon mission was blown. It was a trap, an elaborate ruse. Whatever anyone outside of their team would call it, Cipher and his squad only knew that it was a Borg setup that needed his command codes to activate. Instead of the Trojan Horse coming to them, they got on the horse, and it bucked them off, hard.

Now, Cipher, Black Rose, Weaver and Midas were on the run, dodging hostiles with clear intentions that they do not make it out of their killbox. This was especially after the comms array was obliterated from the map in a glorious explosion, rendering it harmless to the Fleet. As they rounded about a small, boulder-dressed valley that is slightly covered in altitude-induced snow, an enemy disruptor blast skirted off of a bounder near Kiara "Black Rose" Noel-Rhode's head. "CONTACT REAR!" Kiara turned to return fire at the hostiles. 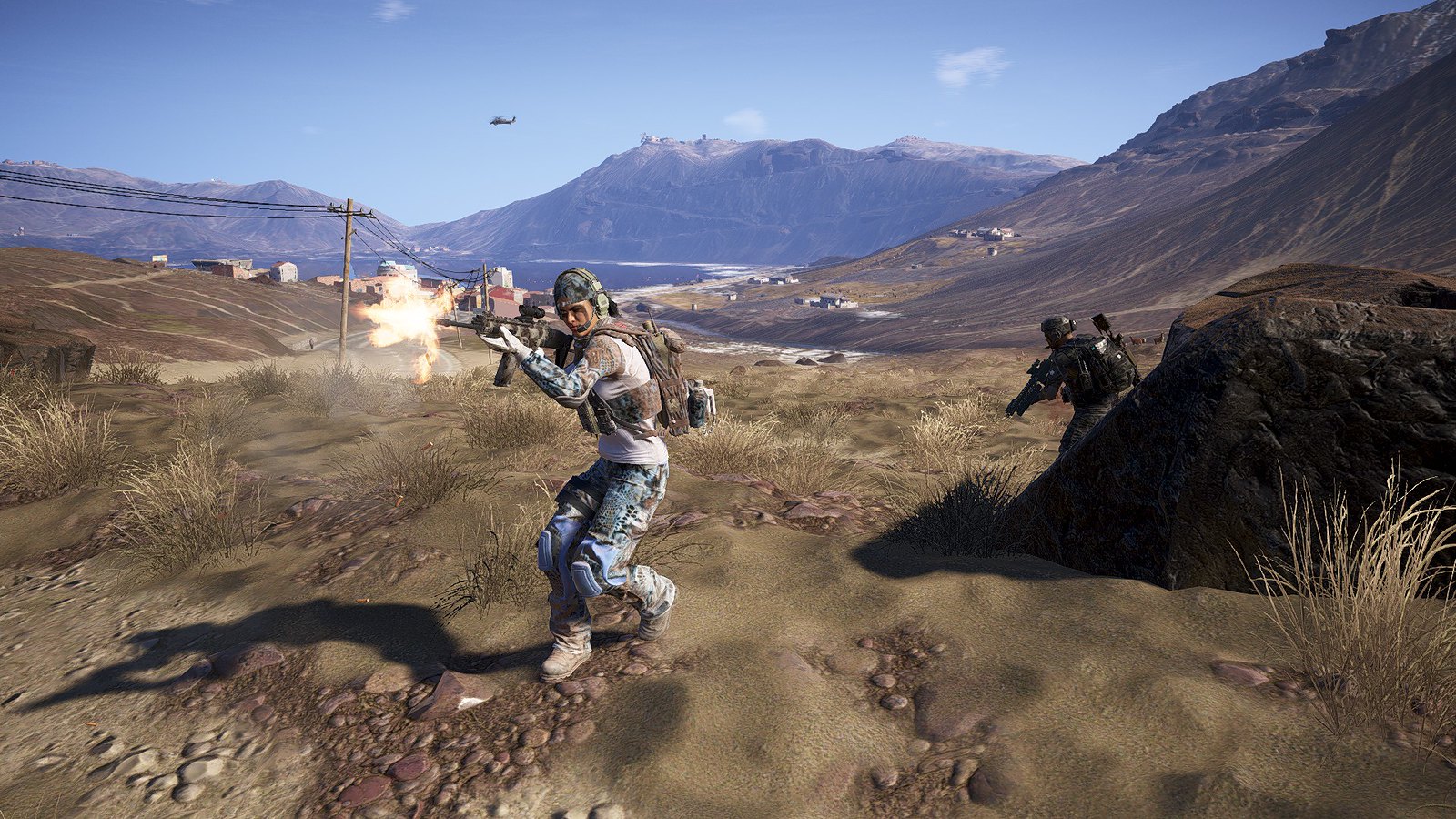 Midas was only able to right towards his left halfway. Before he could aim, two disruptor blasts hit home in his chest area. "I'm..." he tried to say as his comms went dead, body damaged as the impact pounded him against an abandoned fast-moving four-wheeler.

"Man down, man down! Cover me!" Weaver called out to reach his fallen comrade. NME (Non-allied Militant or Malignant Entity) fire continued to range on towards the group, Cipher and Black Rose finding cover before they realized that Weaver was still in the line of fire.

Cipher aimed at an NME tango and fired, neutralizing him but not before he let loose a small, ball-shaped object, possibly an explosive. "Weaver, grenade, get down!"

"Hang on I..." Weaver's words were cut off by the NME grenade, rendering him incapacitated as well.

"Frakking hell! Man down!" Cipher called out. Black Rose slid to his side, panting as she was reloading her rifle.

"Baby, what the hell is this?"

"Just hold your shit together Black Rose," he says as he grabs her by her chest rig, making sure she stayed focused in the moment, in the battle. "We expected this to happen, that's why we're here. I'll cover you, you get Midas, I got Weaver. Hold what you got Marine, copy?"

Kiara nodded to him, understanding him to the letter.

"Always," he says, reloading his weapon. "THREE!" Cipher kneels and peeks out, laying down covering fire for Black Rose to move towards Midas first. He leans more towards his right, getting the tighter angle of an NME tango's chest before he squeezes the trigger of his Enhanced Compression Rifle, putting three rounds true centermass, thus neutralizing another NME.

Cipher found a lull in the fighting, bursting into a sprint to another point of cover and concealment. He reaches out and grabs the unconscious Weaver and pulls him to safety.

Meanwhile, Black Rose tends to Midas, opening her Advanced IFAK (Individual First-Aid Kit). She starts jamming her special regenerative cocktail of combat sims and medi-gels into his chest using her tactical hypospray. Midas' body glowed as the formulas worked their magic, repairing just enough damage to the inside and outside of his body. Midas takes a breath of new fresh air as he immediately rips away the fragged armor plating that saved his life, giving Black Rose a chance to get him back in action. "Black Rose, if Cipher don't take you back, I sure as shit will, thank you." 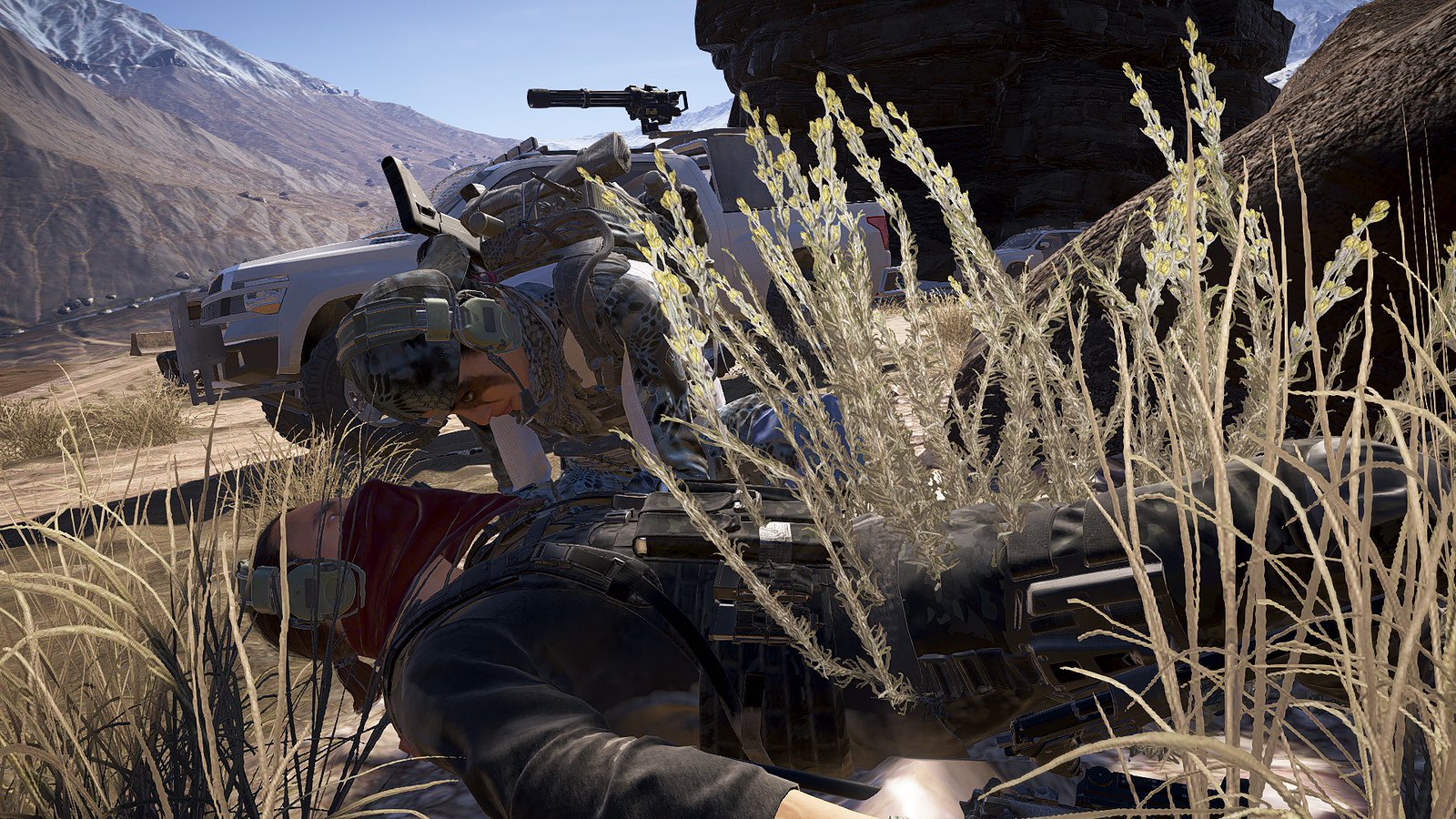 "I heard that Staff Sergeant," Cipher says, dropping a humorous clapback as he tends to Weaver's shrapnel wounds. Midas and Black Rose soon join him.

"Cipher, let me see him," she says as she gets straight to work on him. She cuts away his damaged armor, seeing that out the outside on his arms, were just cuts and scrapes. Weaver coughed up blood as she tended to him. "Shit, hang on Weaver! Get his lets before he goes into shock!" 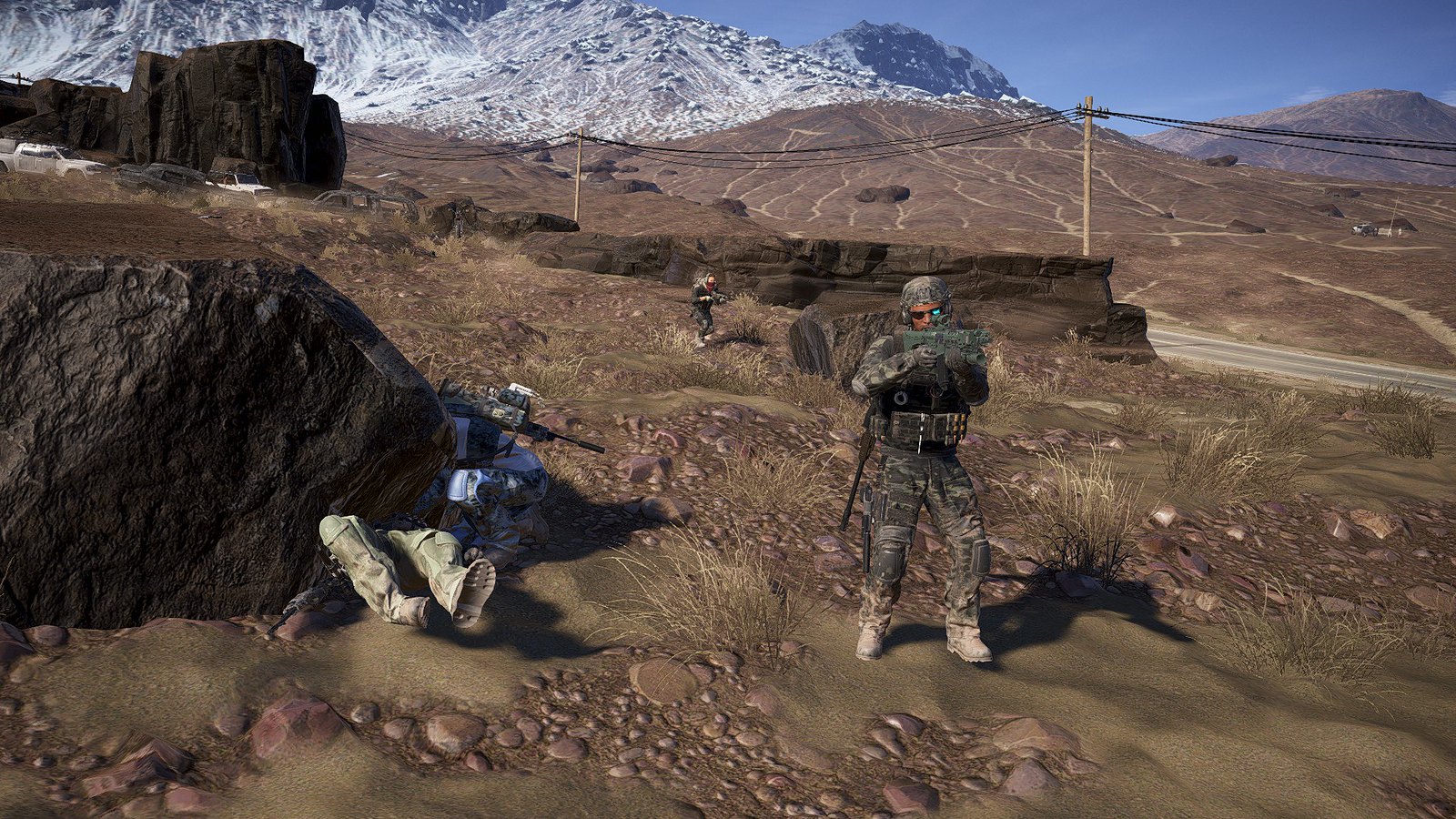 Midas does what Kiara orders, lifting his legs as she scanned him with her combat tricorder. It showed heavy internal bleeding, internal concussion damage from the grenade blast. She reaches in her gear and hands Cipher and Midas a medical regenerator, a minor and a major respectively. She held onto the critical regenerator and instructed, "On three, we hit him at the same time or we lose him. Ready?"

Weaver began to flash blue and green beneath them. His body was being renewed as he was literally snagged from the clutches of a painful death. He coughs up another spat of blood, but it was only the last contaminates as he was back to 100%. Weaver rises up to look at Cipher. "Permission to speak freely sir?"

"If you would have shot straighter I wouldn't have been FRAKKED UP!"

"So says the guy that tripped over an NME apple," Cipher quipps as he helps Weaver up and reassess his armor protection.

Midas looked to his right, he noticed more NME contacts charging in with fast-movers. "We got company Boss, we gotta move!"

"We're here to investigate, not to fight people. Let's move on," Cipher says as he hands Weaver back his weapon. Just as they were about to take up defense posture again, more unknown weapon fire emitted from behind them, and struck down the NMEs.

"Jódense soldados!" One of the unknown combatants yelled as he and his comrades continued to suppress the NME, forcing them to break off contact and retreat.

Cipher raised his weapon towards the unknown group. "STOP OR I WILL FRAKKING SHOOT!!!" 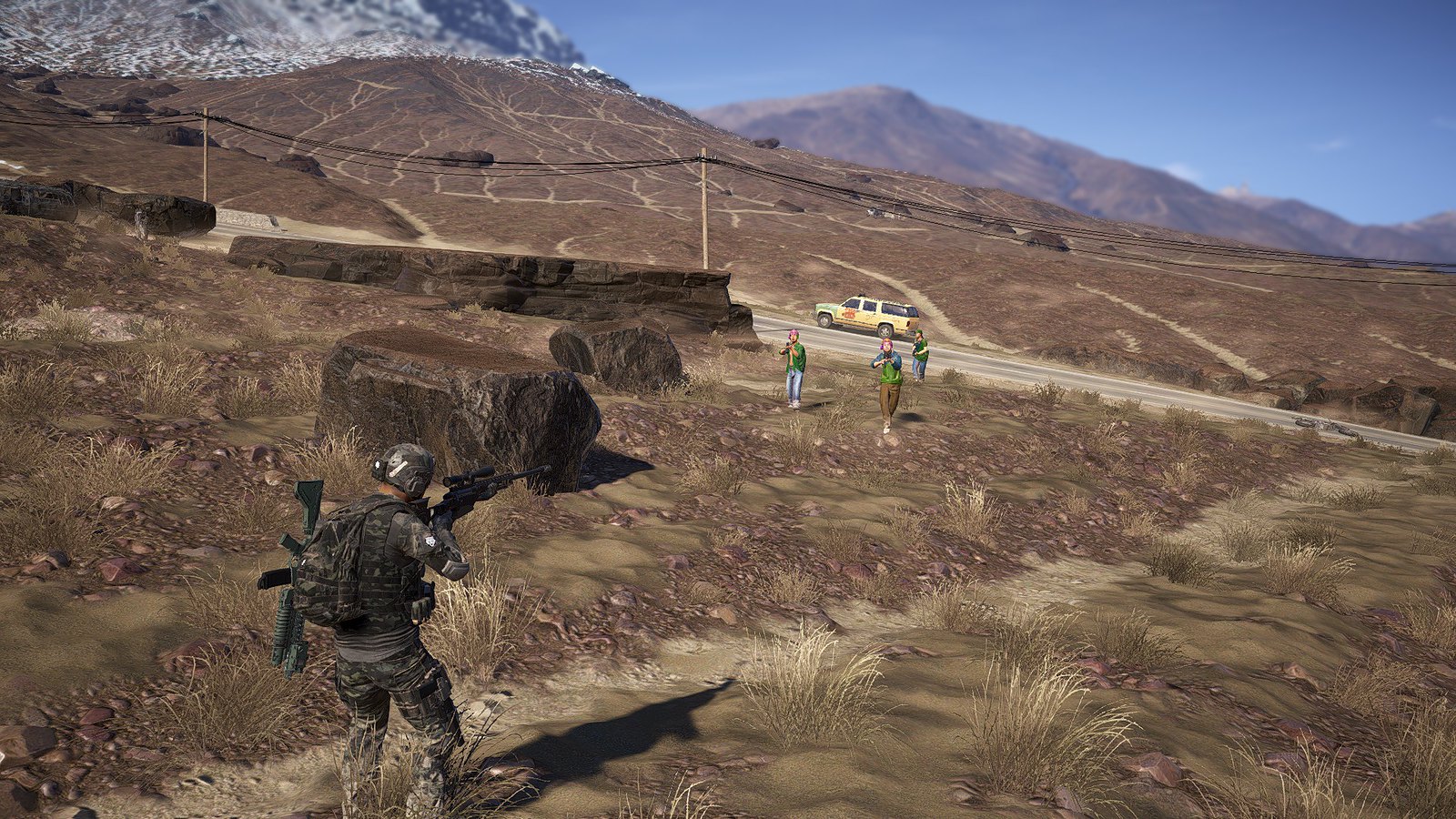 The unknowns came to a dead halt, raised their hands, "Wait wait wait cumpa, amigos, friends!" the leader of the small group says. "We're Hermanos, like you and Green man, yes?"

Cipher looked at them strangely, his own team waiting to light them up on his command. Taking a chance, he issues them a challenge. "We're brothers, right? Then who won the 1994 World Series of Baseball?"

The leader thought of his answer and said, "Oh yeah yeah yeah, nobody. The players went on strike that year, no?" 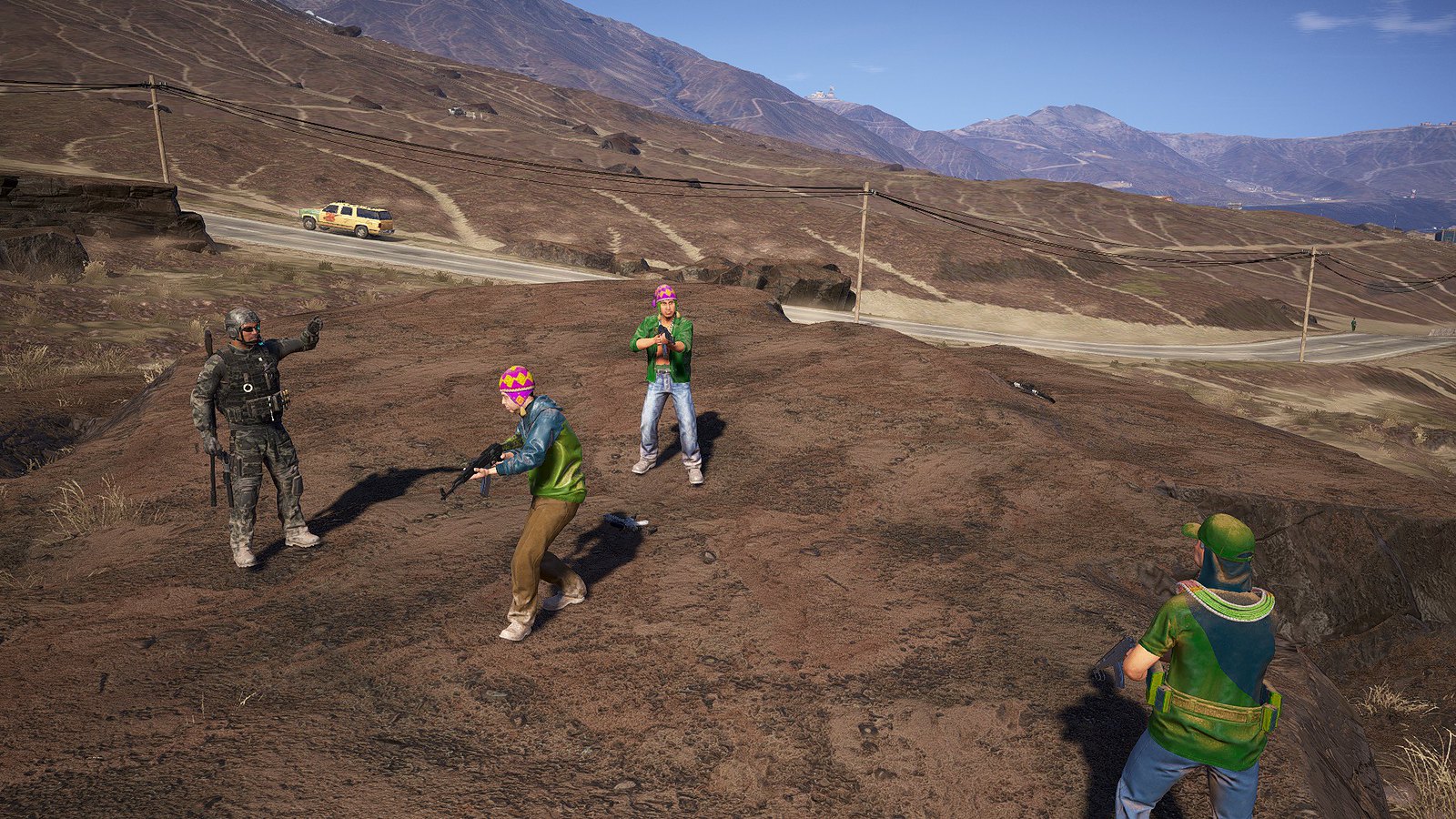 The team looked at each other, and at Cipher. "Sports trivia, words every time."

Cipher offered a handshake to the group, to which they accepted. "Sorry about that, and thanks for saving our asses. You can call me Cipher, I'm the officer in charge. My second in command is Black Rose," Kiara nodded to them, "my medic Weaver," Weaver taps his hat, "and my comms specialist Midas, who tends to break everything he touches."

"At least it turns to gold first," Midas claps back.

"ANYWAY," an annoyed Cipher says as he returns his attention to their new friends, "who might you gentlemen be?"

"Oh yeah, I'm Lonzo, and mi hermano Hector and my cousin Tomas, we're the local Luchadores that try to keep out trouble."

"Sorry to bring it to your doorstep. You have my word we will be out of your hair and we will repair any other damage we may have caused in due time."

"My friend, the only way we found you was with the explosion, and we were able to get a fix on your locations when the jamming went down for the last few minutes."

"Jamming? But we just ended up..." Cipher started piecing some of this fragmented plot together. Obviously this was a Borg play. But what was their aim?

"Yeah, come on Cumpa, let's take one of their trucks and follow us to the barrio. We got lots to catch up on."

Cipher nodded to his team as the headed into one of their vehicles. He opens a door for Black Rose to step in first, still being the consummate officer and gentleman, even in unknown territory, deep behind what could still be enemy lines. On one hand, they're starting to put a definite fingerprint on a main antagonist. But as far as this whole reverse Trojan Horse scheme and barely stopping it in-time, who knows what else the 16th Special Task Force will face, even with that may be around the corner.