The USS Veracruz is an Allegiance Class Starship operating in Second Life since launching in October of 2011 (Stardate 111001). Commodore Kinney Randt has been in command, along with Executive Officer Commander Aryela Dagger from launch date until the present.

We had just resumed our standard patrol route after spending some time reviewing old records from the USS Hood when we received a hail from UFS Command, asking us to diver to the Lamai System, where a solo federation scientist needed transportation back to Pinastri after some sort of setback.

Record show Dr Ann Franklin had taken the runabout Mississippi to this system to preform some sort of chroniton experiments.

With luck, it'll be a simple flat tire, and we will be able to resume our regular course without the need to travel back to Pinastri again.

In an effort to increase engine efficiency aboard the USS Veracruz, engineering began a series of 'hull plating' test to map out any potentially hazardous micro and or major fractures within the ship's hull.

Our first wave of tests proved to be inconclusive; which in retrospect is a fair test. Our results indicate hull stability remains solid at 98.5463%. Starfleet protocol calls for a 95.4653% as the minimum safety tolerance for any commissioned vessel; but anything under the tolerance of 100% could always be better. We intend to enforce this saying to its prime potential.

In other news, our voyage today called us to an unknown sector of space called the Lamai sector. It is to my understanding that the Veracruz was summoned to this sector in an effort to respond to a distress call from a federation scientist by the name of Dr. Ann Franklin. Most of the details towards this mission were classified. However, my report will consist of the shuttle we recovered from the area and its assessed damage.

Upon arrival, our engineers were able to observe a substantial amount of damage on the starboard side of the shuttle Mississippi. Above the nacelle, the area was ripped open and exposed to space. Normally, one would expect connectors, conduits and relays here. What we discovered was a mess. It was no wonder the shuttle was out in the middle of nowwhere and unable to move.

As our teams were able to inspect the shuttle further, we came to a couple of distinct conclusions. For starters, this shuttle had to be at least 75 years old. Engineers tend to determine the life and maintainence of any particular shuttle (or ship for that matter) by how slow or fast plasma emissions decay from the nacelle exhaust system. A fast plasma emission decay indicates the system is trying to overcompensate either due to lack of plasma or deuterium that isn't fully refined within the system; slow plasma emissions being the opposite effect.

The second conclusion that we were able to come up with is that even with all of the damage present on this shuttle, we couldn't determine any cause for the damage. The only way this would be possible is if the operator and or someone inside with the operator of the shuttle was causing it. No foul play could be determined.

In conclusion, either our former doctor was ambushed unaware or our doctor's viewpoint on sanitation standards are subpar.

The work of Dr. Ann Franklin is... interesting, as far as the little bit of information that isn't ridiculously classified. Of what pittance I was able to garner, the concept of using anti-chronitons to reverse aging is highly limited, and borderline quackery. I'm not sure that the late Doctor would have succeeded past what she already had achieved, and it's implication on cellular function could have been her main hindrance. However, I am not responsible for a critique on her work, otherwise I would be able to READ it *cough* hint starfleet science *cough*. What I do know, is that her rapid change in appearance had nothing to do with that discovery. She was getting onto something, but nothing like we saw.

What we DID see, was the species known as Vendorians.

A cephalopod-familial sentient being from Vendor, Vendorians were often employed by the Romulans to serve as spies. A treaty stood with the federation to quell such espionage pursuits using Vendorians. The Romulans' adherence to this treaty, of course, is largely questionable. 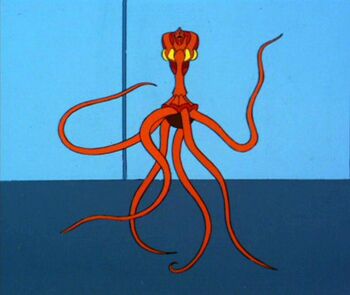 While they appear similar to octopi or squid of earth, there are several differences. They have 6 to 7 tentacles, which give them incredible agility on land. They are not aquatic per se, but some are known to quite enjoy water. They have five eyes on pentagonal points of their head, giving them a complete 360 degree range of sight. However, they lose this advantage in their changed forms. They still see however, even when in the form of something lacking eyes. With their combination of highly evolved synapses, flexible tentacles, and range of sight, they have markedly better reflexes than humans... possibly Vulcans as well.

Vendorians are able to mimic the appearance of other beings, and even inanimate objects, through a tactile based cellular metamorphosis. This means that they can change form into a great variety of things, as long as they have come in contact with one. Their mimicry is so advanced as even fool crude medical equipment from a few hundred years ago, though not to perfection. More modern methods might be more effective, but not enough research has been done to confirm this. The transporter did not catch the variation in cellular structure, so I'm inclined to say that they are still difficult for us to detect.

Upon touch contact, Vendorians not only obtain molecular information on the object they wish to appear, but also absorb memories and even character traits. The longer they remain in this form, the greater the absorption into their own consciousness these traits become. There have been documented cases of feelings being assimilated to the point that they almost feel what their originator felt. This also means that their ability to imitate the person or object is linear to the time spent in the form. When in the form of an inanimate object, they can perform basic functions of their guise. For example, if they are appearing as a light, they are capable of emitting light when switched on, and can even conduct current. The more complex the currents, the more difficult the form is to maintain and replicate. Another factor in their forms relates to mass. Since matter cannot be destroyed, Vendorians are limited by their overall body mass, meaning what they imitate must be of similar mass to their own. This also suggests that they are incapable of appearing invisible, otherwise this limitation would be null, as they could simple make the "rest" of themselves unable to be seen.

The late Dr. Franklin was an apparent victim of the Vendorian that came aboard our ship. He... she? It? Um... I'll go with it. It posed as the Doctor, which granted it entry onto our ship. From there, at some point it came into contact with Commander McCellan, and took on his form. Luckily for McCellan, the Vendorian did not spend much time in his form. This made his imitation a bit clumsy. There was also an unusual twitch, which in retrospect was also observed in its Doctor form. Perhaps this is something that fades with time, or was particular to this individual Vendorian.

We don't come across this species very often. I myself must admit that I did not immediately recognize it, and it's rather my life's work to be able to do so. Interesting as this encounter may be, it holds more of a harbinger atmosphere than anything of scientific delight.

Due to the particular nature of Vendorians, security will have to maintain a high level of vigilance and observation on the Vendorian in our brig. Pillows, bowls, essentially everything must be kept count, to avoid it posing as a dirty sheet and allowing escape.

More of an aside than a conclusion, apparently this Vendorian was sent by Skellos. Anything having to do with Skellos is never good news... nor simple. Crews are working to decipher the message it sent from Fred's console. Considering the clearance level and access capabilities of a chief operations officer, this could be just about anything.

The difference between genius and stupidity, is that genius has its limits. - Albert Einstein

Individual Reports: Security dealing with a prisoner in the brig a shape shifter known as a Vendorian. The vendorian were known as spies and mercenaries for hire primary used by the romulans. Prisoner gave intel on a planet that stored data on a lieutenant in skellos' gang upon retreving intel the runabout was discovered to be booby-trapped with high yeild explosives designed to destroy the ship and its occupants in mid-flight Commander gron syntron was able to disable most but the ship was scuttled once all relevant intel was seized. Intel shows that the lieteant mentioned in the dossier is an orion female most likely the one we have been tracking for theft of a hign value item for starfleet and kidnapping of federation civilans.

The shift at Helm started out simple enough and my first act was to set a course for the Lamai System. I engaged the ship at Warp 5 and wondered why we, of all the ships, we assigned to go to this strange world and assist this Dr. Ann Franklin. This doctor has been doing research on aging and history makes me wary of getting involved at all.

I increased speed to Warp 7 after we contacted Dr. Franklin and we eventually picked her up. Her demeanor was suspicious and she looked awfully young for someone who was supposedly in research for years. Perhaps she experimented on herself? She claimed she was 63, but looked hardly into her 20's...if that.

It turns out Dr. Franklin was experimenting with anti-chronitons, which do cause deaging. She also seemed to be enamored with Fred and kept touching him seductively and calling him perfect. Eventually, she left the bridge with Fred in tow and we thought all was well...

Fred eventually came back after leaving the doctor in guest quarters, but he began to act very strange. After exhibiting strange behavior for several minutes, Fred turned into an octopus and began fleeing for his life until Security caught him!